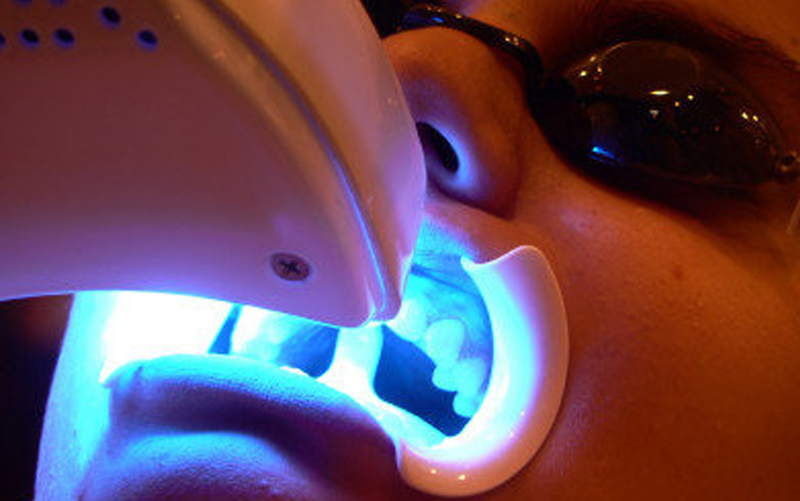 In the blossoming world of cosmetic dentistry, teeth whitening reigns supreme. Universally valued by men and women alike, whitening (or bleaching) treatments are available to satisfy every budget, time frame and temperament.

Whether in the form of one-hour bleaching sessions at your dentist’s office, or home-use bleaching kits purchased at your local drugstore, teeth whitening solutions abound. Yet only 15 percent of the population has tried the cosmetic procedure, and misinformation on the subject is rife.

The long and the short of it is that teeth whitening works. Virtually everyone who opts for this cosmetic treatment will see moderate to substantial improvement in the brightness and whiteness of their smile. However, teeth whitening is not a permanent solution and requires maintenance or “touch-ups” for a prolonged effect.

According to the FDA, the term “bleaching” is permitted to be used only when the teeth can be whitened beyond their natural color. This applies strictly to products that contain bleach – typically hydrogen peroxide or carbamide peroxide.

The term “whitening,” on the other hand, refers to restoring a tooth’s surface color by removing dirt and debris. So any product that cleans (like a toothpaste) is considered a whitener. Of course, the term whitening sounds better than bleaching, so it is more frequently used – even when describing products that contain bleach.

Intrinsic stains are those that form on the interior of teeth. Intrinsic stains result from trauma, aging, exposure to minerals (like tetracycline) during tooth formation and/or excessive ingestion of fluoride. In the past, it was thought that intrinsic stains were too resistant to be corrected by bleaching. Today, cosmetic dentistry experts believe that even deep-set intrinsic stains can be removed with supervised take-home teeth whitening that is maintained over a matter of months or even a year.

Age: There is a direct correlation between tooth color and age. Over the years, teeth darken as a result of wear and tear and stain accumulation. Teenagers will likely experience immediate, dramatic results from whitening. In the twenties, as the teeth begin to show a yellow cast, teeth-whitening may require a little more effort. By the forties, the yellow gives way to brown and more maintenance may be called for. By the fifties, the teeth have absorbed a host of stubborn stains which can prove difficult (but not impossible) to remove.

Starting color: We are all equipped with an inborn tooth color that ranges from yellow-brownish to greenish-grey, and intensifies over time. Yellow-brown is generally more responsive to bleaching than green-grey.

Translucency and thinness: These are also genetic traits that become more pronounced with age. While all teeth show some translucency, those that are opaque and thick have an advantage: they appear lighter in color, show more sparkle and are responsive to bleaching. Teeth that are thinner and more transparent – most notably the front teeth – have less of the pigment that is necessary for bleaching. According to cosmetic dentists, transparency is the only condition that cannot be corrected by any form of teeth whitening.

Eating habits: The habitual consumption of red wine, coffee, tea, cola, carrots, oranges and other deeply-colored beverages and foods causes considerable staining over the years. In addition, acidic foods such as citrus fruits and vinegar contribute to enamel erosion. As a result, the surface becomes more transparent and more of the yellow-colored dentin shows through.

Grinding: Most frequently caused by stress, teeth grinding (gnashing, bruxing, etc.) can add to micro-cracking in the teeth and can cause the biting edges to darken.

Trauma: Falls and other injuries can produce sizable cracks in the teeth, which collect large amounts of stains and debris.

Significant color change in a short period of time is the major benefit of in-office whitening. This protocol involves the carefully controlled use of a relatively high-concentration peroxide gel, applied to the teeth by the dentist or trained technician after the gums have been protected with a paint-on rubber dam. Generally, the peroxide remains on the teeth for several 15 to 20 minute intervals that add up to an hour (at most). Those with particularly stubborn staining may be advised to return for one or more additional bleaching sessions, or may be asked to continue with a home-use whitening system.

Many dentists are of the opinion that professionally dispensed take-home whitening kits can produce the best results over the long haul. Take-home kits incorporate an easy-to-use lower-concentration peroxide gel that remains on the teeth for an hour or longer (sometimes overnight). The lower the peroxide percentage, the longer it may safely remain on the teeth. The gel is applied to the teeth using custom-made bleaching trays that resemble mouth guards.

The bleach preference for in-office whitening, where time is limited, is powerful and fast-acting hydrogen peroxide. When used in teeth bleaching, hydrogen peroxide concentrations range from approximately nine percent to 40 percent.

HOW WHITE CAN YOU GO? A MATTER OF ESTHETICS

Teeth whitening results are subjective, varying considerably from person to person. Many are immediately delighted with their outcome, while others may be disappointed. Before you embark on any whitening treatment, ask your dentist for a realistic idea of the results you are likely to achieve and how long it should take to achieve them. Expectations play a major role in teeth whitening.

In the dental office, before-and-after tooth color is typically measured with shade guides. These are hand-held displays of wide ranges of tooth colors. (Dentists also use them in choosing crown and other restoration shades.)

The standard-setter among them has long been the Vitapan Classic Shade Guide. This shade guide standard incorporates 16 shades, systematically arranged from light to dark into four color groups, and provides a universal tooth-color terminology.

While whitening can occasionally lighten tooth color by nine or more shades, most of those who bleach their teeth are likely to see a change of two to seven shades.

Teeth whitening treatments are considered to be safe when procedures are followed as directed. However, there are certain risks associated with bleaching that you should be aware of:

Sensitivity: Bleaching can cause a temporary increase in sensitivity to temperature, pressure and touch. This is likeliest to occur during in-office whitening, where higher-concentration bleach is used. Some individuals experience spontaneous shooting pains (“zingers”) down the middle of their front teeth.Individuals at greatest risk for whitening sensitivity are those with gum recession, significant cracks in their teeth or leakage resulting from faulty restorations. It has also been reported that redheads, including those with no other risk factors, are at particular risk for tooth sensitivity and zingers.
Whitening sensitivity lasts no longer than a day or two, but in some cases may persist up to a month. Some dentists recommend a toothpaste containing potassium nitrate for

Gum irritation: Over half of those who use peroxide whiteners experience some degree of gum irritation resulting from the bleach concentration or from contact with the whitening trays. Such irritation typically lasts up to several days, dissipating after bleaching has stopped or the peroxide concentration lowered.
Technicolor teeth: Restorations such as bonding, dental crowns or porcelain veneers are not affected by bleach and therefore maintain their default color while the surrounding teeth are whitened. This results in what is frequently called “technicolor teeth.”

To extend the longevity of newly whitened teeth, dentists are likely to recommend:

At-home follow-up or maintenance whitening – implemented immediately or performed as infrequently as once a year.
Avoiding dark-colored foods and beverages for at least a week after whitening.
Whenever possible, sipping dark-colored beverages with a straw.
Practicing excellent oral hygiene – brushing and flossing after meals and at bedtime.